We are a non-profit organization that has been promoting, supporting and supporting initial training and pre-vocational support for people with a migration background in non-medical, medical areas for 30 years and support programs and monitoring. In particular, this also includes subject-specific language preparation courses or accompanying support courses, which serve as the basis for training. Since 2008, the Turkish-German Health Foundation has been increasingly involved in language support for migrants. Furthermore, the TDG e.V. trains specifically-oriented mentors or pilots whose standards are developed as part of pilot projects. In addition to the headquarters in Gießen, there are also other branches in Germany and Turkey. The association also works closely with national and international health and social organizations. 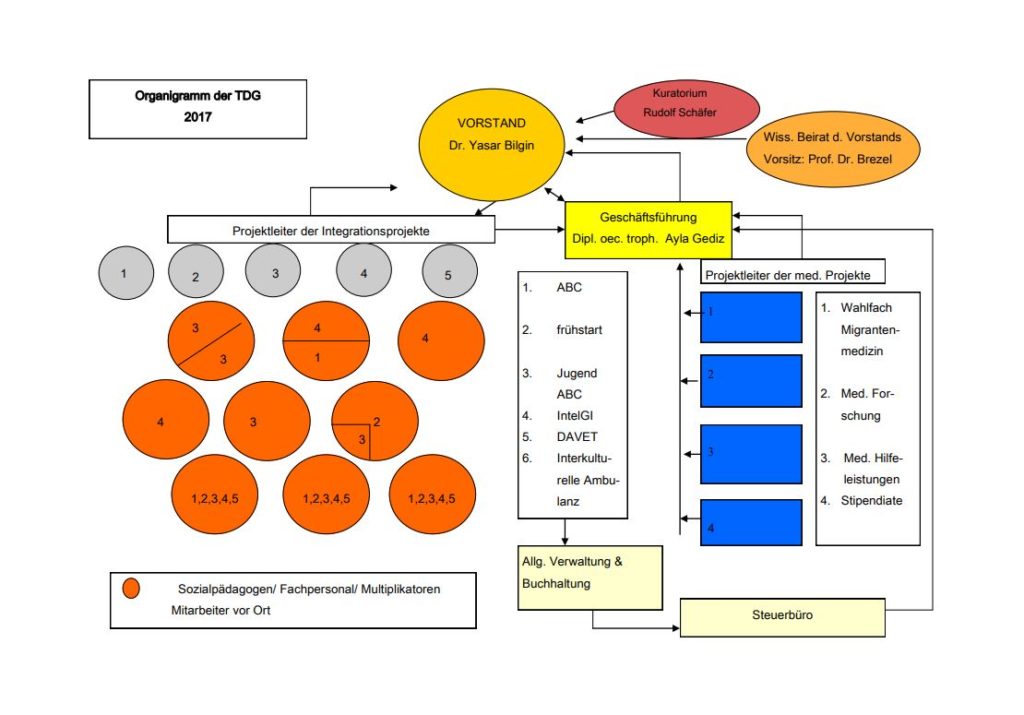 Click on the picture to open a pdf of our club structure.

Turkish and German medical professionals, as well as other active people, founded the Turkish-German Health Foundation in 1988 in Frankfurt am Main.

The reason for the foundation was our medical observations and experiences in the Medical Clinic III and the polyclinic of the University Clinic of the Justus Liebig University Gießen. Due to language difficulties, a lack of intercultural competence and often also a lack of empathy, there were communication deficits in the doctor-patient relationship, which affected the diagnosis.

Different prevalence of diseases was striking, for example the number of heart attacks among Turkish men was both more frequent and ten years earlier than among German men. TDG e.V. was able to use scientific studies to correct the pain in the abdominal area, which was diagnosed as psychosomatic by migrants and allegedly caused by homesickness. All of this prompted us to establish a clinical-scientific focus area at Medical Clinic III and Polyclinic in Gießen. Among other things, this migrant medicine was awarded the Hessian Integration Prize 2005 by the Prime Minister of Hessen.

In the following years, our engagement was extended to the areas of education, social affairs and integration. In these areas, we carry out self-developed projects and measures that complement each other through a holistic, goal-oriented approach and increase their effectiveness.

Yaşar Bilgin was born in Mersin in Turkey. Upon completion of the Tarsus American College, he came to continue his study in Germany. He studied Medicine and Philosophy at the Justus Liebig University in Gießen. After finishing his medical studies, he completed medical training to become a specialist in internal medicine and cardiology in the Kerckhoff Clinic of the Max Planck Society and the University Clinic in Gießen. He worked as a cardiologist at the Louisville Humana Heart Institute in Kentucky. In 1991 he received the title of lecturer from Istanbul University and in 1998 he was awarded the title of professor in cardiology by the Onsekiz Mart University Çanakkale. He has also had German citizenship since 1991.
He is head of the „Health and Migration“ working group at the University Clinic in Gießen and Marburg. Dr. Bilgin is the founder and chairman of the Turkish-German Health Foundation and chairman of the Avicenna Prize Association and co-founder of the German Islam Forum.
Dr. Bilgin is a member of the Scientific Council of the American Heart Association, member of the „Forum against Racism“ of the Federal Ministry of the Interior, member of the Intercultural Council in Germany eV, member of the Integration Advisory Board of the Hessian State Government and the Federal Government, member of the Board of Trustees Avicenna-Studienwerk, founding member of Working group „Migration and Public Health“ of the Federal Government Commissioner for Migration, Refugees and Integration and Honorary Member of the „Honorary member of advisory board of Turkish citizens abroad“. He is also a board member of the Dogus Foundation University in Istanbul and a board member of the Presidium of Bilim University in Istanbul. He is married and has two children.

His awards and honors:

TDG works with a small core team of employees who have been involved in TDG e.V. for years. Depending on ongoing projects / model projects, specific new project employees are then sought.

Board members of the Turkish-German Health Foundation e.V.